Selected historical quotations from early users recounting recreational use of the Valley's canals
Picnic on the Arizona Canal, early 1900s

Have you ever wondered how people lived here before air conditioning? How did they stay cool in the summer?

Of course, everyone knows water is essential for life in the desert. But its value extends beyond simply watering crops and quenching our thirst. Water has nourished the social life in the Salt River Valley for as long as humans have lived here.

The canals and Arizona Falls provided shade and a welcomed respite from the heat and were a natural gathering place.

In the mid-1800s, a gold rush brought prospectors to Arizona. One prospector, Jack Swilling, found "gold" in an unlikely place – the ancient ruins of Hohokam canals. He brought the canals back to life and a new "rush" based on irrigated farming began.

In 1868, a settlement called Phoenix emerged. By the 1880s, visionary entrepreneurs like William J. Murphy and farmers built miles of canals, including the Arizona Canal on which Arizona Falls sits.

Once the canal system was finished, it served as a gathering place for locals. Most people in the Phoenix area at the turn of the century did not have air conditioning or swimming pools, and the canals offered a place to cool off, visit with friends and enjoy the summer. People picnicked under the trees, swam and caught up with gossip from their neighbors.

William Murphy purchased land near Arizona Falls where he built the Ingleside Club. By 1910, Ingleside included a golf course and a tennis court. His son, Ralph, took over the property and developed it into the Ingleside Inn.

Wealthy visitors to the inn visited Arizona Falls and picnicked and danced at the falls, enjoying the lush trees and calming sounds of the water.

Children Playing in Laterals, circa 1920

Arizona became a state on Feb. 14, 1912, and Phoenix was named the capital. Elite Phoenicians put down their roots, built beautiful homes and created neighborhoods near the canals.

They amassed large amounts of wealth and affluence, making Phoenix the commercial and political center of the state.

By the 1920s, tourism was a central part of the Arizona economy. Thousands of people flocked to the state seeking the health benefits and luxury of the mild winter climate. This created a seasonal influx of tourism and trade.

Because they made so much revenue during the winter, hotels would simply shut down in the summer time. As you can imagine, the locals who lived near the canals would still be swimming and recreating, even if the tourists were not.

During the 1930s and the Great Depression, many locals used the canals as swimming pools. There were only a few local public pools and they had an admission charge that most people couldn't afford.

Kids had their favorite spots along the canal where they used ropes to swing into the water, played games, had races, sailed toy boats and even surfed. 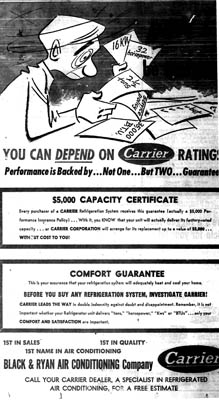 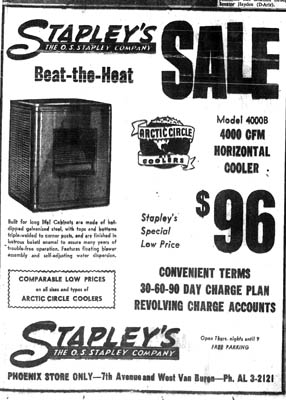 The outbreak of war in 1941 brought Phoenix out of the slump of the Depression. War efforts put people back to work and manufacturing increased. By 1945, evaporative cooling was widespread, and by 1951, nearly every home had a window unit.

This made the Arizona summers more tolerable and increased the demand for electricity. The small hydroelectric power plant at Arizona Falls was abandoned as SRP developed new ways to provide power for the growing region.

Air conditioning and population growth revolutionized the city and how people lived here. Instead of seeking the cool water and shade of the canals, Phoenicians spent more time indoors and swimming in private pools in the backyards of their suburban neighborhoods.

People no longer congregated at Arizona Falls to find relief from the heat.

In 1998, the Phoenix Arts Commission, SRP and the Bureau of Reclamation partnered to revitalize this historic gathering place into a functioning hydroelectric plant and educational site. In 2003 it was reopened to the public. The power plant now supplies over 150 homes with electricity produced from the water.

Since then there has been a renewed interest in outdoor activities, such as biking, running, walking and horseback riding, around Arizona Falls. The canals and Arizona Falls have once again become places where people go to recreate, attend events and socialize.