Listen. The sound of water is all around you. Underneath you it flows west, along the way providing water for drinking, bathing and flushing toilets, nourishing food crops and watering gardens and landscapes. You can see it, you can hear it, you can feel it. But where does all of this water come from? Aren't we in a desert? 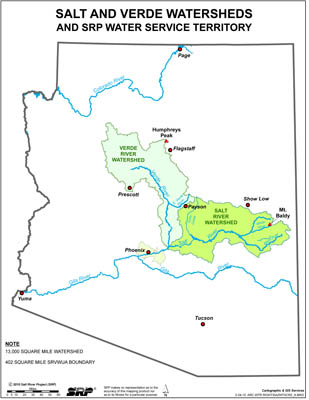 The Salt River Valley is a special place. In the middle of one of the hottest, driest environments in North America, two rivers – the Salt and Verde – flow downhill from the mountains east and north of Phoenix to make human life here possible.

Humans have harnessed the water within this expansive region – the "watershed" – for 2,000 years. The Phoenix area only receives about 8 inches of rain annually. But the high country to the east and north, with mountains whose craggy peaks scrape the sky as much as 10,000 feet above Arizona Falls, can receive as much as 200 inches of snow a year.

The snow melts and runs downhill from small stream to small stream and through the ground until it makes its way into the Salt and Verde rivers.

The water is then stored behind a series of dams. From there, the water flows into a series of canals and underground pipes stretching 1,300 miles throughout the Valley. 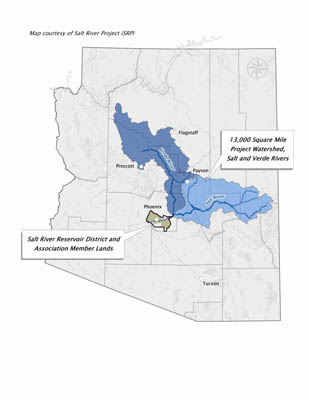 In 1986, the U.S. Bureau of Reclamation completed the Central Arizona Project that transports water uphill from the Colorado River 300 miles west of here to the Salt River Valley and southeast to Tucson. With the completion of the Central Arizona Project, the Phoenix metropolitan area tapped into the immense Colorado River watershed and melting snow from the Rocky Mountains.

Today, the Valley's water system is a mix of human invention and natural processes, managed, in part, by SRP to deliver water to millions of people.

Taking into account the water from the Salt, Verde and Colorado rivers and the water stored deep beneath the ground, the Phoenix area has a lot of water. Yet it is still part of a desert. The ability of the Salt and Verde river watersheds, the Colorado River and the Valley's aquifers to continue to meet the needs of Valley residents as the population grows will depend on wise use of the water we have.

SRP is continuously developing new ways to keep track of every drop in the canal system to make sure that we have enough water for today and can conserve water for the future.